Utsukagura: a tale of feelings

« Utsukagura » is the name of the story that was created under the advice and direction of Hayao Miyazaki. He was heavily inspired by the Minami Shinshuu area, where a great number of Gods reside. This area is also one of the three main inspirations behind Spirited Away. This story was performed for the first time during the first edition of the Hirugami Yokagura festival. 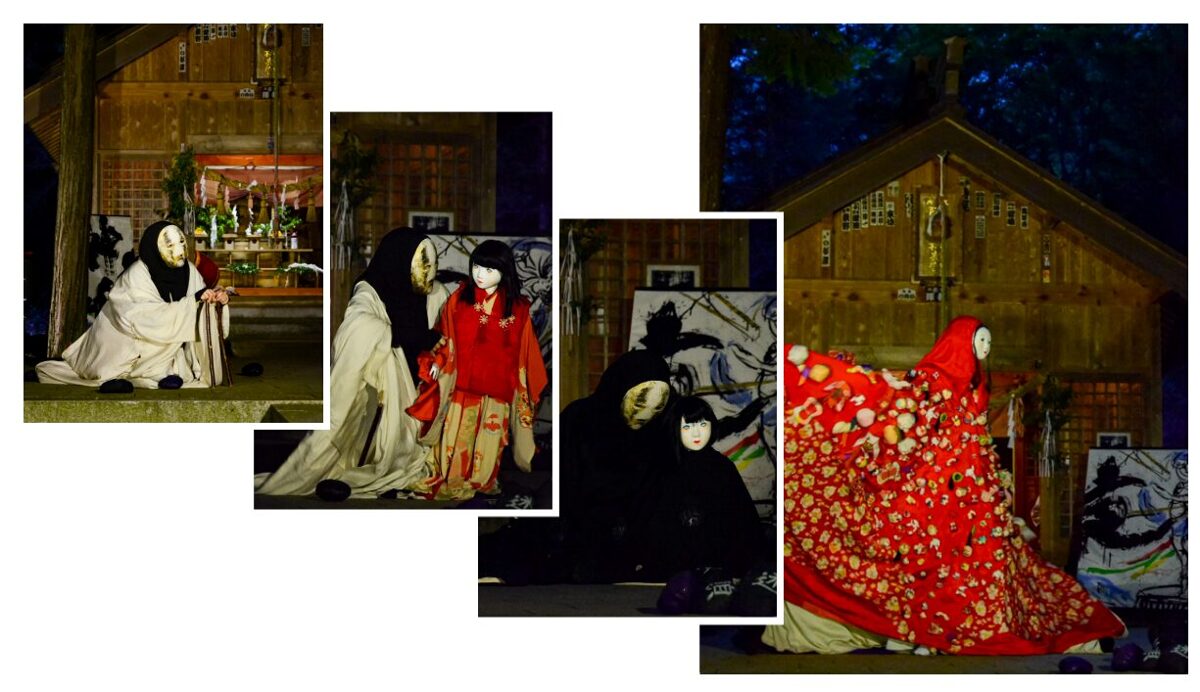 Once upon a time, a young Goddess inhabited a forest of peace. The forest’s role was to help relieve humans of the bad feelings inside them, by gathering and purifying their anguish, their sadness…

One day, the negative energy gathered by the forest became overwhelming and could not be purified anymore. After witnessing this, Gaïa decided to rid the Earth of this forest contaminated by dark energy.

Because a Goddess can never disappear completely and her power was a hurdle in Gaïa’s plans, she got turned into a white Utsuo that keeps her hidden inside him by consuming the dark energy balls now scattered throughout the forest.

One day, the white Utsuo met a little girl who wandered into the forest. They spent some time together, played together, and started to become friends, but because Gaïa had already given up on humans, a dark voice came from the depths of the forest and told the white Utsuo to eat the little girl. After consuming her, the Utsuo turned black and was tortured by this evil act.

When the purity of the little girl touched the purity of the young Goddess locked inside the Utsuo, a new Goddess was born to protect the forest of peace once again. After seeing that, Gaïa decided to give humans one more chance and stopped erasing the forest.

It is however impossible for someone to completely get rid of negative feelings, and there may come a day when the forest gets overwhelmed by darkness again. This is why, as a reminder, you can see a dark ball on the Goddess’ shoulder.

Mocco: the giant puppet striding from Touhoku to Tokyo

For the Tokyo 2020 Olympics, Japan didn’t limit itself to only organizing the Games. Other events, more specifically cultural events, were organized under the name of NIPPON FESTIVAL.

Mocco is one of these projects, and its main goal is to connect the Touhoku and Tokyo areas, 10 years after the big East Japan earthquake. To do this, a great number of people worked together, children as well as adults. Mocco’s design was created by children of Touhoku during WORKSHOPS, before being finalized by illustrator Ryoji Arai and puppeteer Noriyuki Sawa. 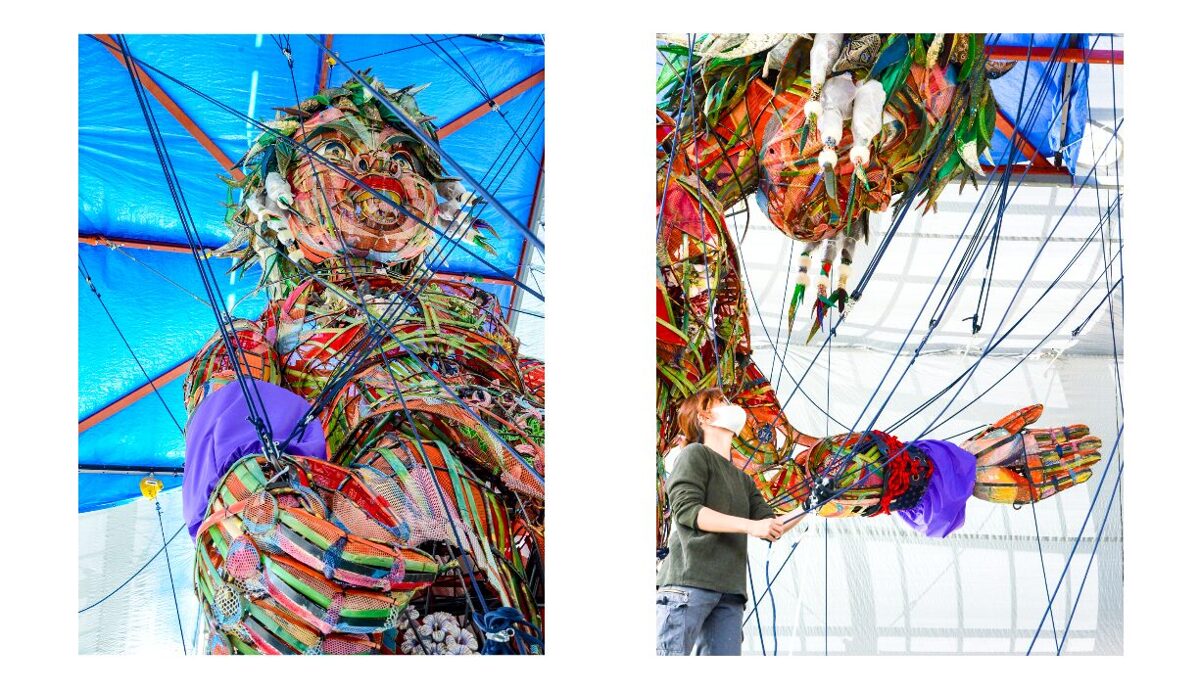 After the 2011 earthquake, Takamori created strong bonds with Touhoku by sending a lot of help and support. This is why Mocco was made in Takamori, to strengthen these bonds once again, before taking Mocco to the Iwate, Miyagi and Fukushima prefectures who suffered the most 10 years ago, and finally Tokyo where Mocco finished its journey, the heart filled with messages from the inhabitants of the visited areas.

These messages were gathered and used by the rapper Mummy-D. He made a song out of them, featuring the singer Sayuri Ishikawa, that they sang together live during Mocco’s latest performance, in Tokyo, on July 17th 2021.

This performance was broadcasted live, given the fact that no viewer could come to Shinjuku park because of the current circumstances. More than one million people tuned in during the live, and you can still watch the REPLAY on Youtube! (for those who don’t speak Japanese: the performance starts at around 23 minutes) 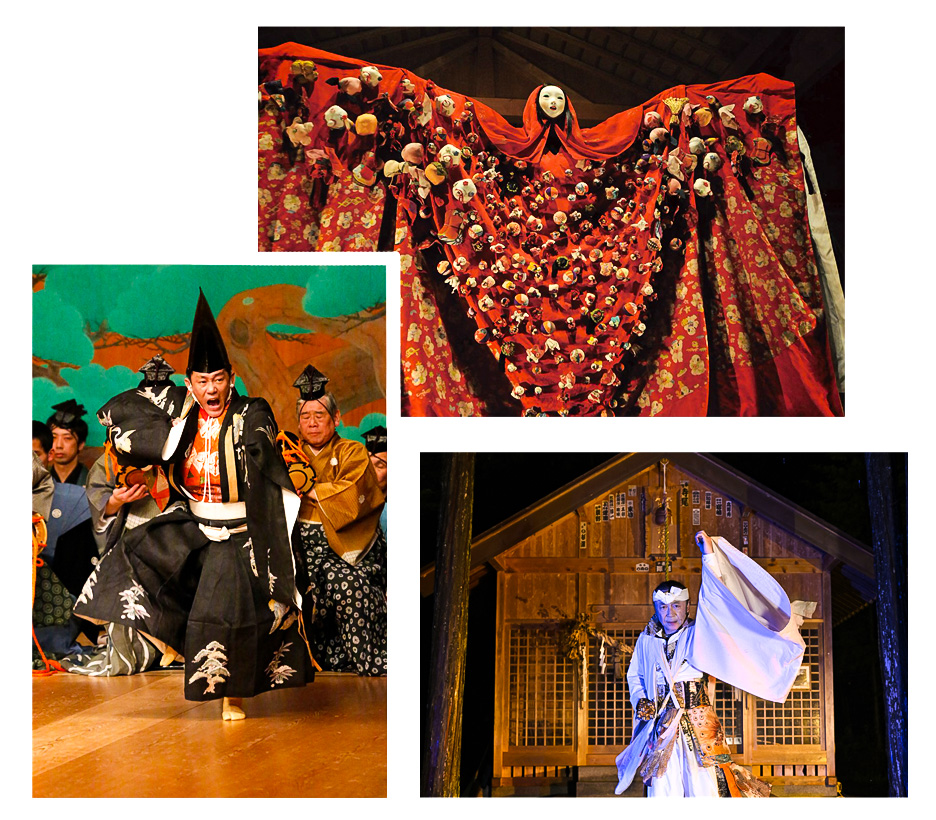 In order to bring hope and a new light to the world while it is enclosed in darkness due to the spread of the Corona virus, the very first Hirugami Yokagura festival will be held throughout the night of the 26th (9pm) to the 27th (5am) of June, JP time, and will be performed on the stone stage of the Achi shrine.

This festival will be the first of a century long tradition, with dozens of artists, performers and more from the South of Nagano prefecture getting together to have fun with the Gods and hope for a bright future.

Feel free to ask any questions in the comments section at any time during the live, I’ll be there to answer you to the best of my abilities!

Here’s a list of what you will be able to see during the first edition of the Hirugami Yokagura festival:

03:55  Creation from an original Hayao Miyazaki idea who was inspired by a local festival 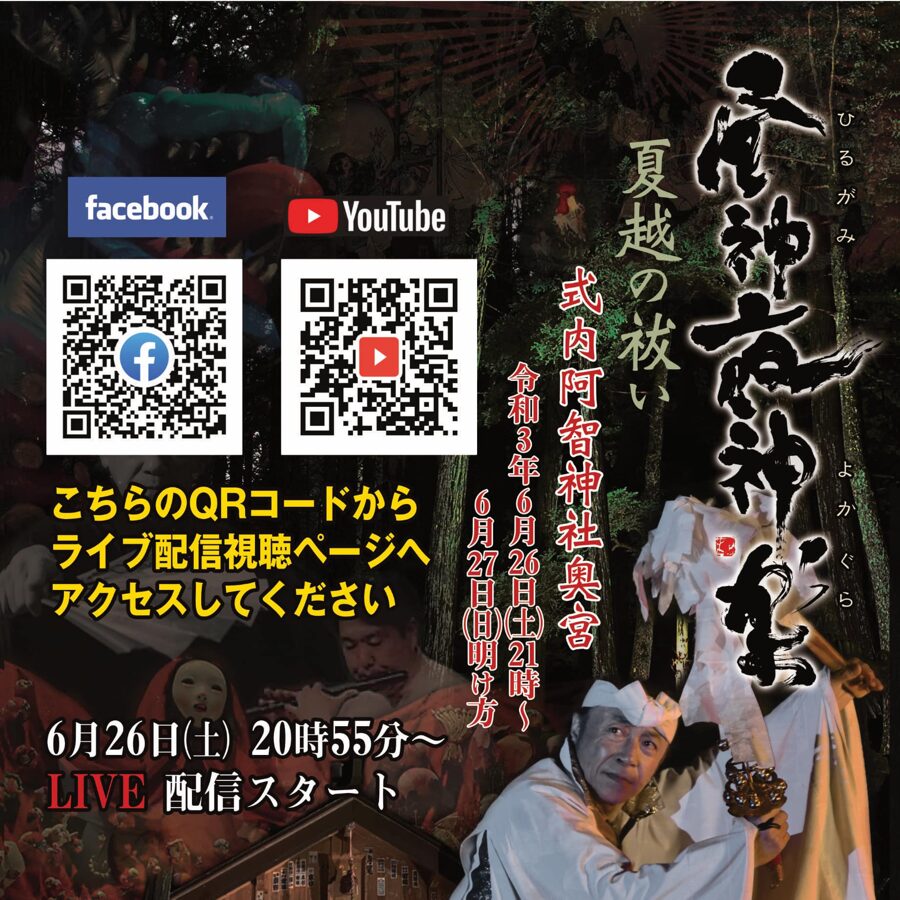 People celebrate by showcasing dolls, that usually represent emperors and empresses. From as early as kindergarten, children make their own dolls to celebrate.

There are also Kakimari-kun Hina Matsuri prints that have started popping up here and there in town. Feel free to celebrate with us by making your own! Here’s the pattern: 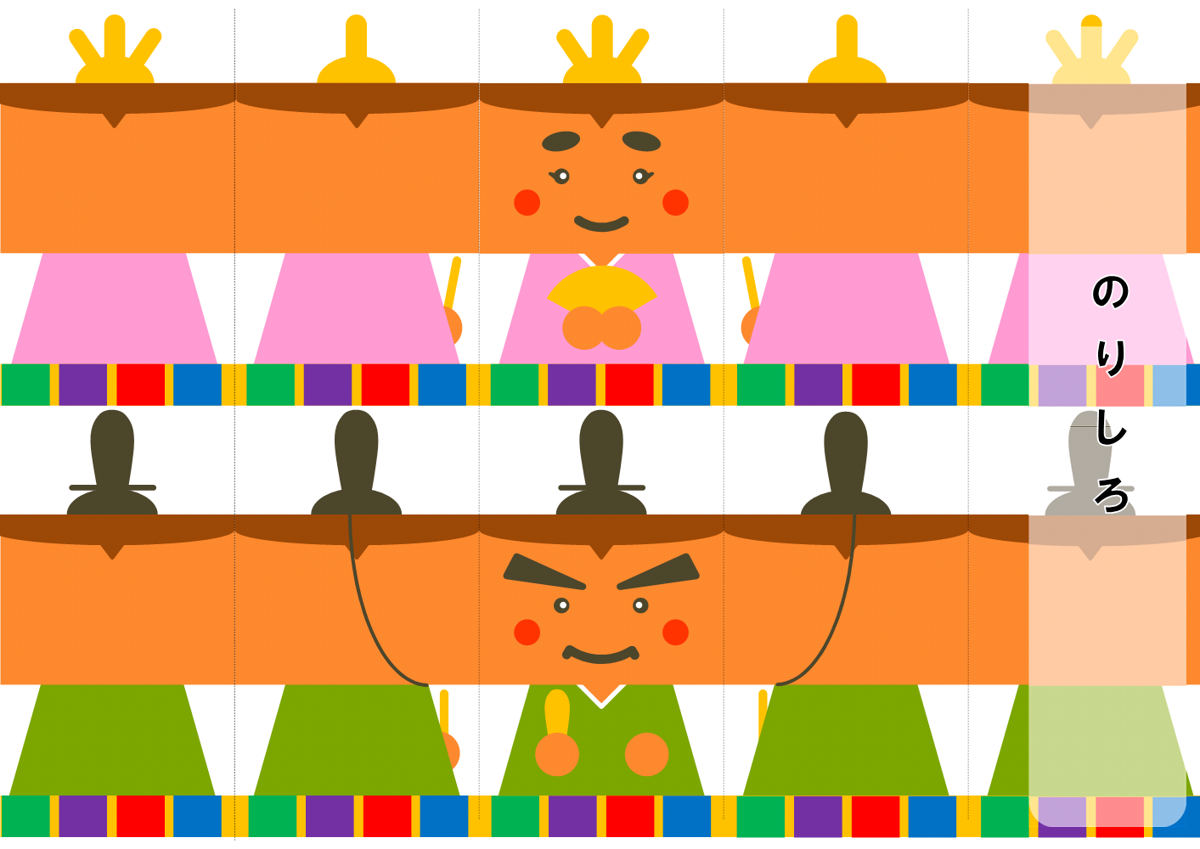 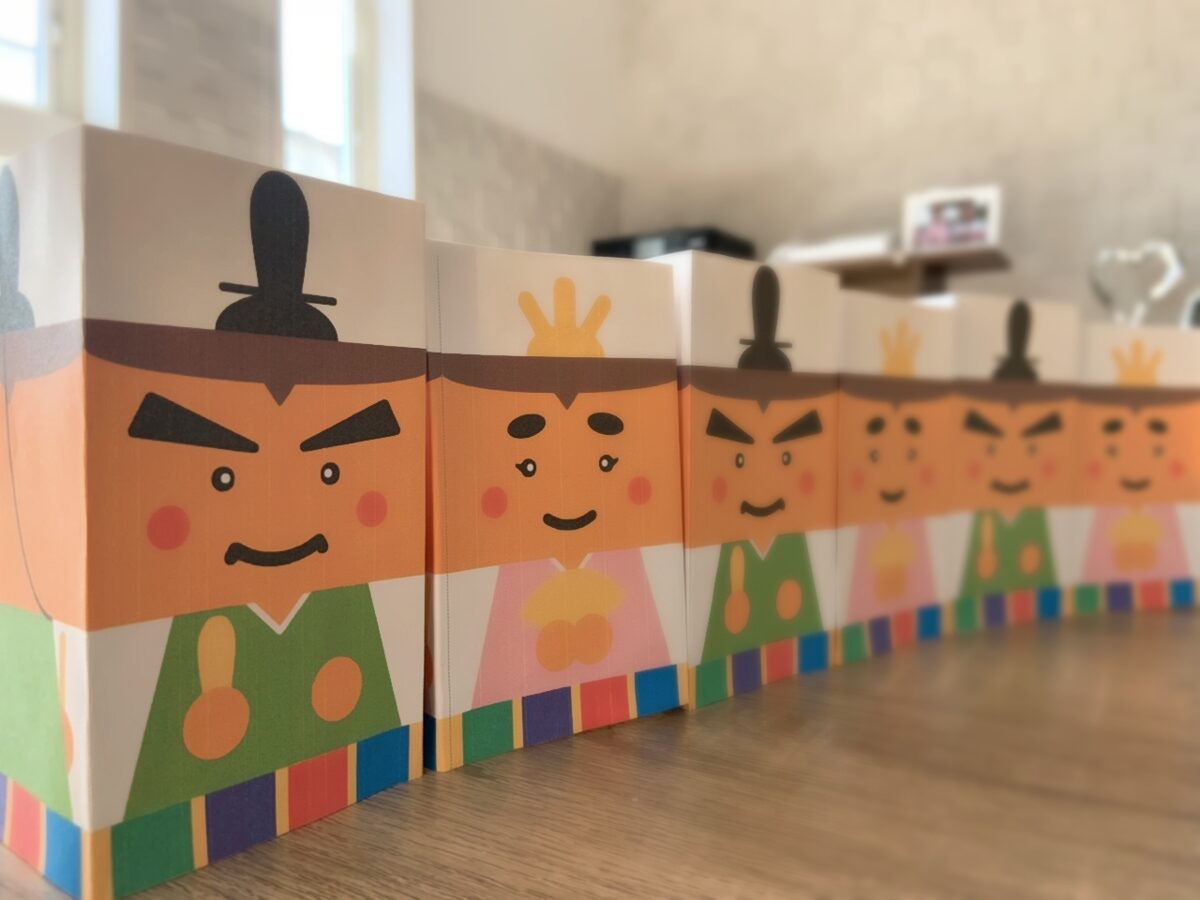 The following dolls were handmade by the children in a kindergarten I used to teach at a couple years ago. Aren’t they lovely? 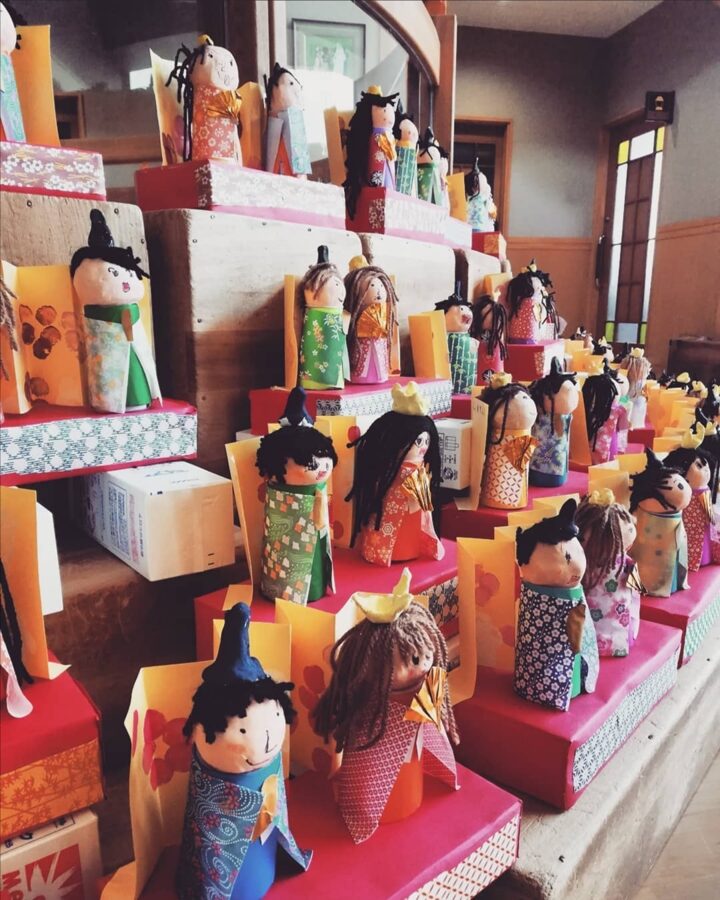 As for many towns in Japan, Takamori wants to do everything it can not to « lose against the Coronas virus ».

In order to help the restaurants during these difficult times, the town hall came up with the following idea:

Every day, the town hall orders bento boxes from the participating restaurants for 800yen per box. The town pays 300yen, and the bento are sold to the customers for 500yen. 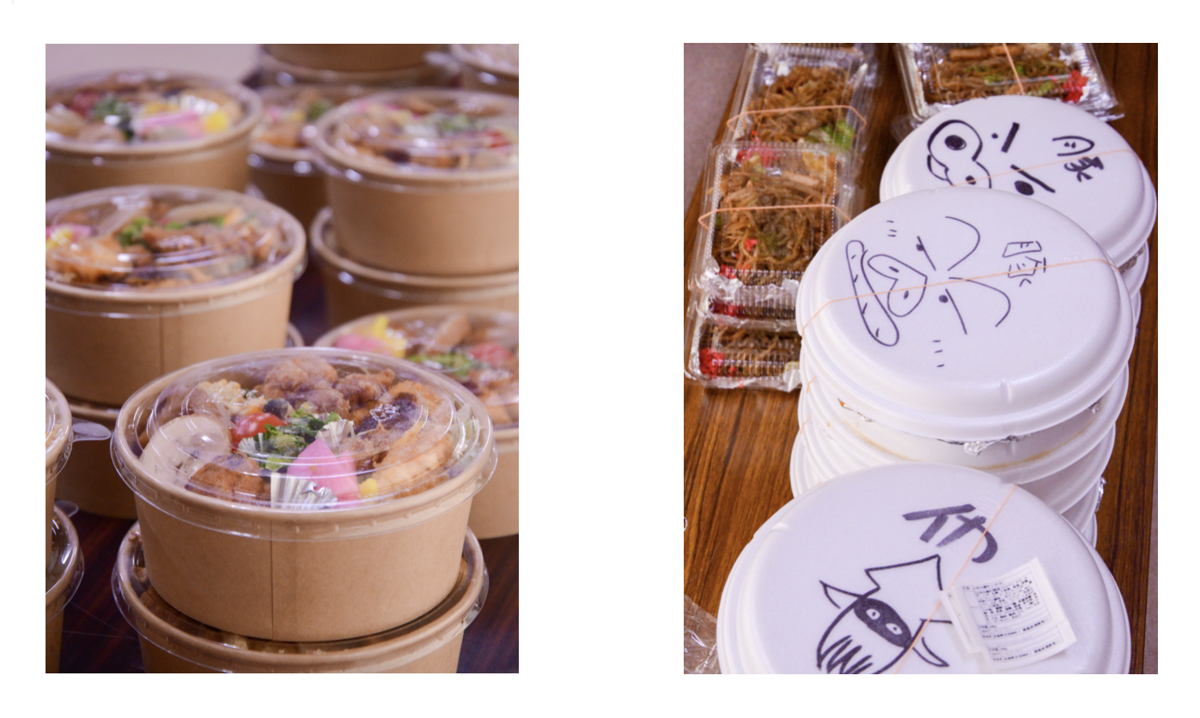 The restaurants bring their freshly made bento boxes to the town hall at around 10am. Town hall workers then prepare all the boxes (printing tags with the ingredients for instance), before taxis come to pick up the bento and bring about 60% of them to companies that made reservations earlier in the morning. The remaining 40%ish are then sold to customers directly at the town hall to limit exposure. 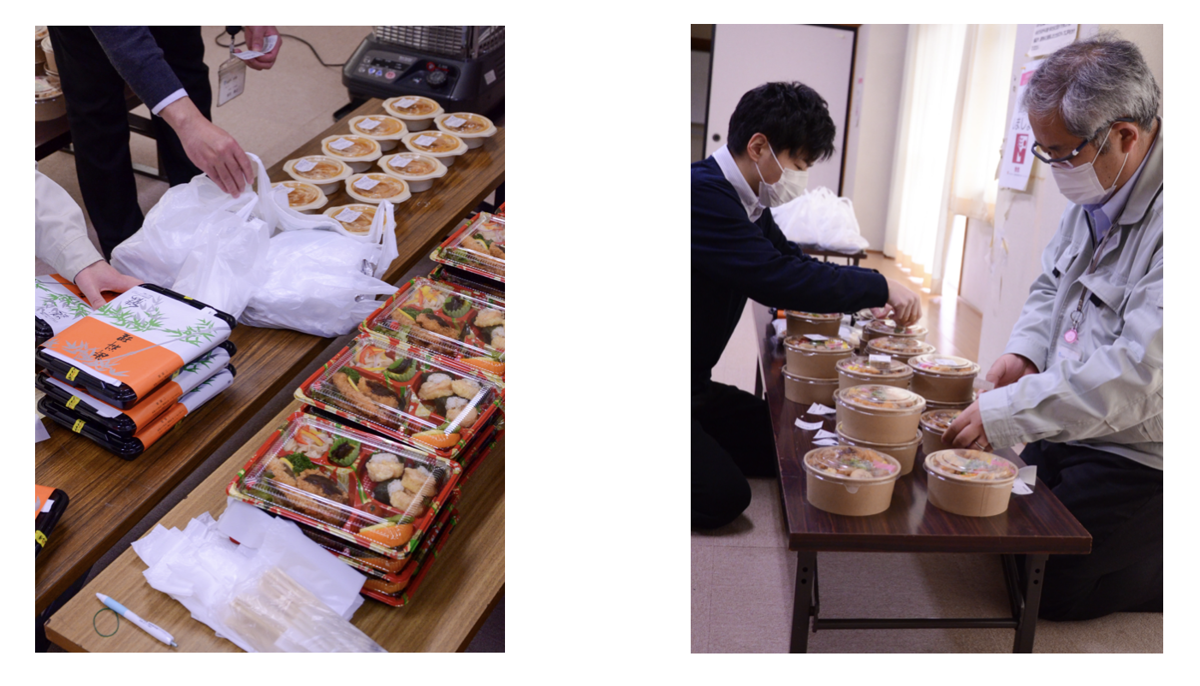 Even though by being careful for a month or so the virus cases are now back to 0 in the area, people are still keeping their distance and checking their temperature to make sure it stays that way.

Because the restaurant business is really slowed down at the moment, this ensures a steady business for the shops without having to take risks with allowing customers to eat in, and because the town pays for more than a third of the bento box, the customers can enjoy a good fresh meal for a cheap price. The taxis' services are paid for by the town hall as well, which is also a good help for them as they don't have a lot of customers either at the moment. 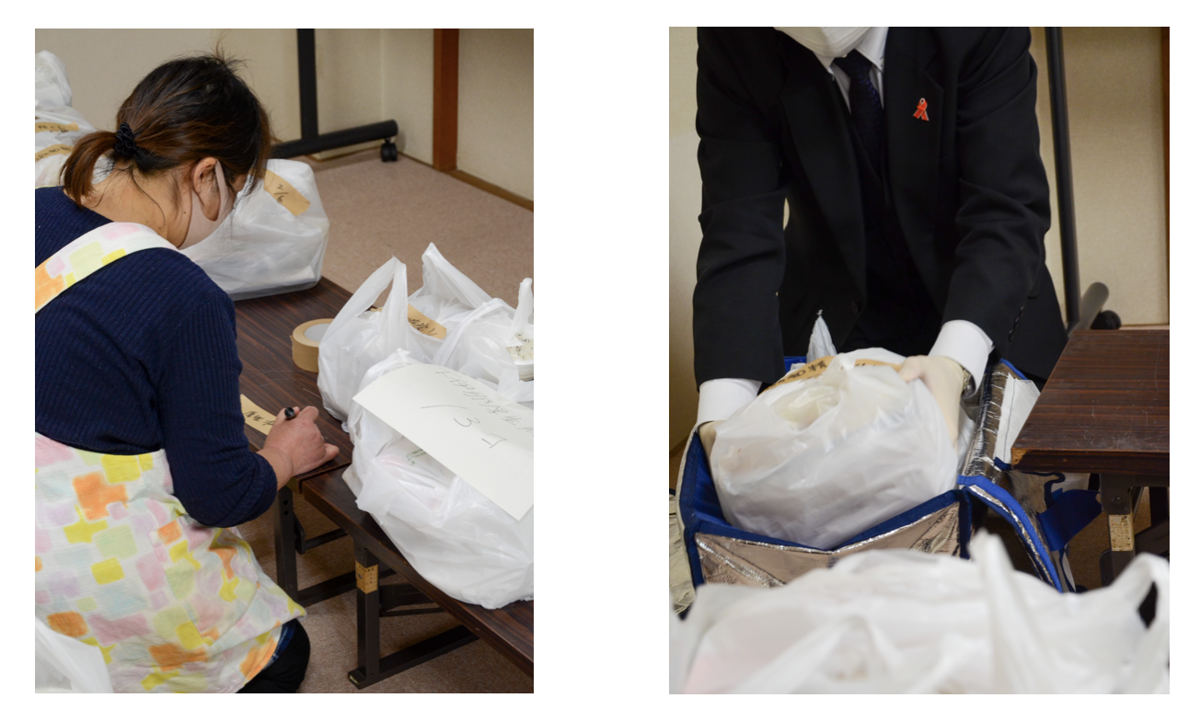 The restaurant workers have said to be very happy with this system, and the only issue the town hall is facing is having to see disappointed customers when the bento boxes sell out. But they usually assure us that they will be back the next day a wee bit earlier to grab one! 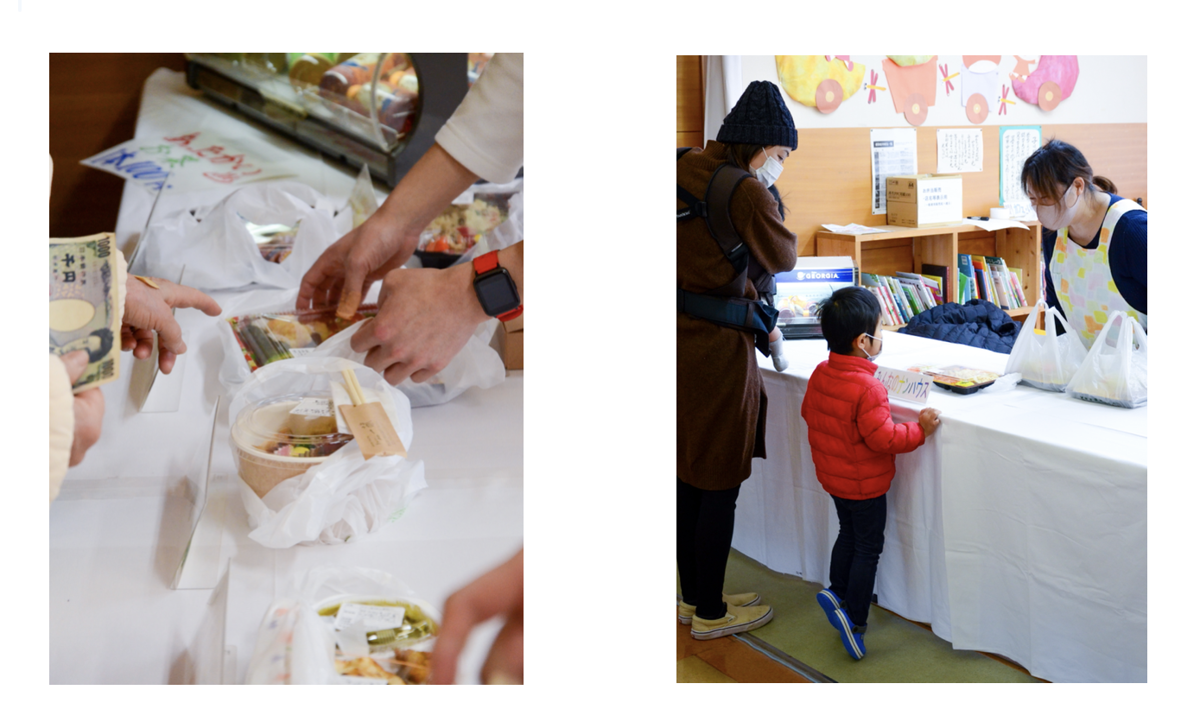 This will keep going for the whole month of February, and possibly longer if things don’t get better by then.

I personally think that this is a great idea, and I’m very happy to be a part of this project. The only reason why the bento boxes sell out so fast is that Takamori’s inhabitants come to the town hall to buy boxes every day as a way to support the restaurants and the town. It’s very heartwarming to see everyone working together!

After the classic « where are you from? », a question that I’m very often asked by curious strangers is « what is your favourite japanese food? ». Even though there are a few that I like more than others, such as japanese curry, fried chicken or taiyaki, my top pick will always be mochi.

These glutinous rice cakes tick all the boxes for me: they can be sweet or savoury, hot or cold, in soups or skewered, boiled or grilled, fresh or frozen, and I find their very chewy texture extremely satisfying to eat (but remember to chew thoroughly, people die because they ate mochi too fast and choked every year..!).

Because it is hard work, people usually make mochi the traditional way only during the new year. It has been made the same way for more than a millennium, and many people still use the same method to this day, but others use mochi making machines or simply buy it at the store. The traditional way of making mochi is called « mochitsuki ».

All my friends and colleagues know how crazy I am about mochi, and a colleague was kind enough to invite my to his family’s yearly mochitsuki.

So, how does one make mochi?

First of all, you need to steam the glutinous rice, then place it in a wet, huge wooden mortar. Now comes the fun, but oh-so-tiring part. Get yourself a big wooden hammer, and pound away! People usually do this in pairs, with one person pounding the rice and the other moving it around with very wet hands. The mortar and hammer need to be kept wet during the whole process, otherwise the rice will stick to the wood.

(You may have seen this famous VIDEO of mochi making in Nara. Definitely try it if you have the chance, they are de-li-cious!) 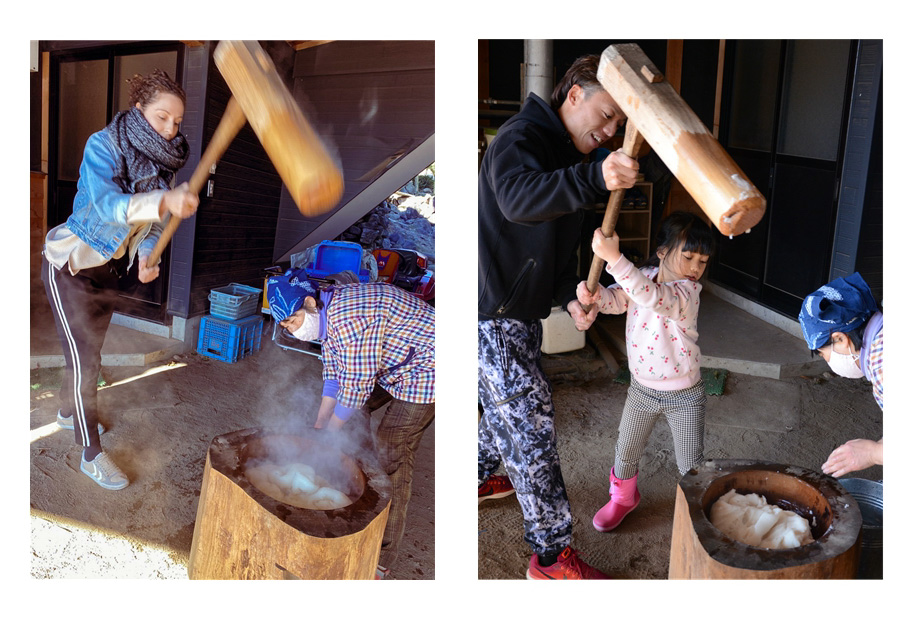 When all the rice has come together nicely into one big mochi, you can then take it out and place it on a floured board to cut and shape it as you like. People usually roll out the dough and cut it into rectangles. After they have dried, they can be frozen or kept in the fridge for a week. Just grill or fry them up when you want to eat them, and prepare them any way you’d like! 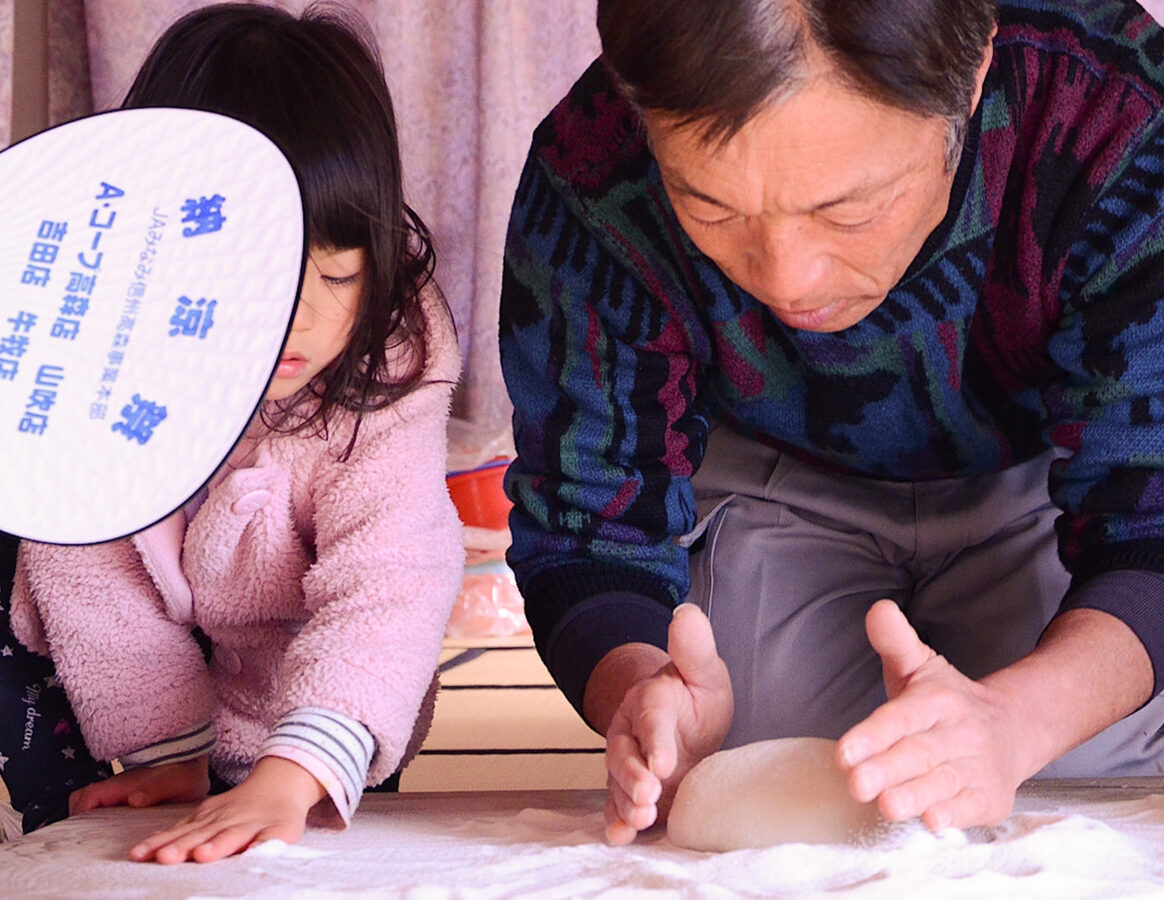 You can also buy glutinous rice flour and make mochi more easily by using only a microwave. You can ask Youtube sensei for more information on this.

Let me know if you try making mochi!

Ichidagaki, or dried persimmon, is the main specialty of Takamori.

In late October to early November, the persimmon farmers start the process of making Ichidagaki, and you can see persimmons hanging all over the town, not only in farms but also at people's balconies as people like to make some by themselves.

However, making dried persimmons is not as simple as it seems. To achieve these delicious, beautifully orange, high-end sweets, the first thing one needs is an adequate climate: cold, dry and sunny. This is why dried persimmons are a rare treat even in Japan. Other prefectures also make dried persimmons, but because the climate is not exactly the same, the persimmons turn brown rather than orange when drying, and the taste is also a little bit different.

The whole process takes about a month with many steps, and the new Ichidagaki are ready by the start of December.

It is important to note that these persimmons are not the same as the ones you can find in the supermarket in the fruits section. This variety of persimmons, called shibugaki, is very astringent and cannot be eaten raw (trust me, I've tried...). So if you want to try your hand at making them at home, be sure that you have the right persimmons.

If you want to try some Ichidagaki for yourself, feel free to visit  japanesetaste.com , they sell ichidagaki made in this area internationally. 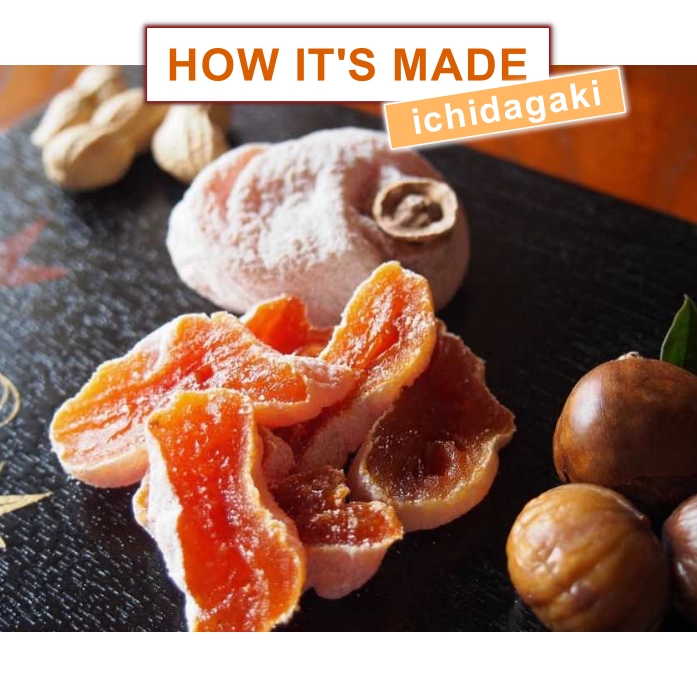 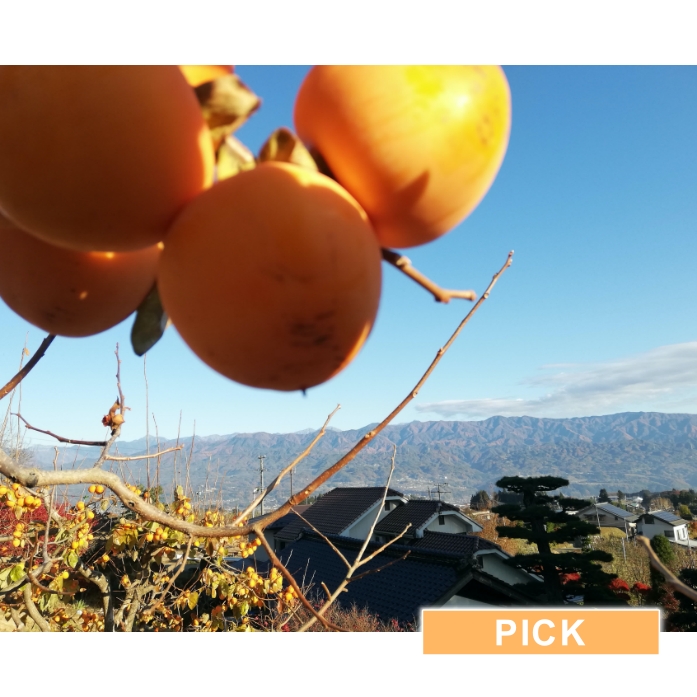 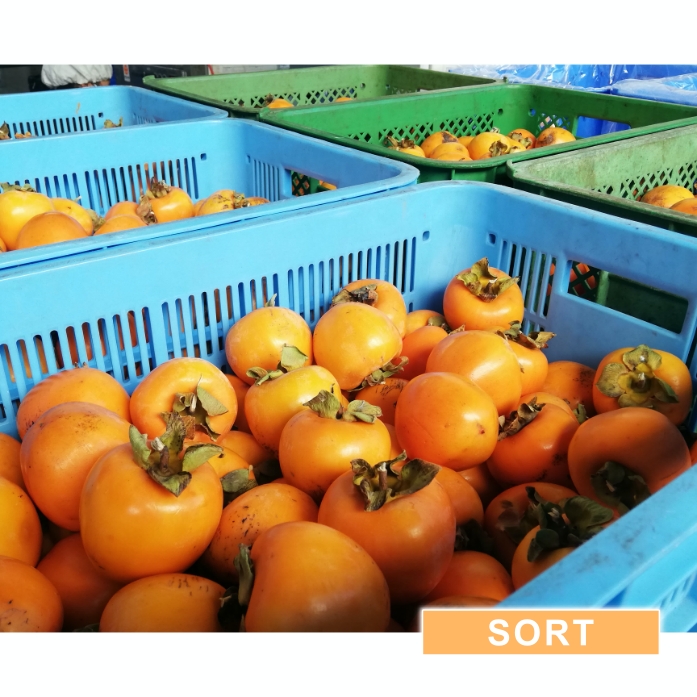 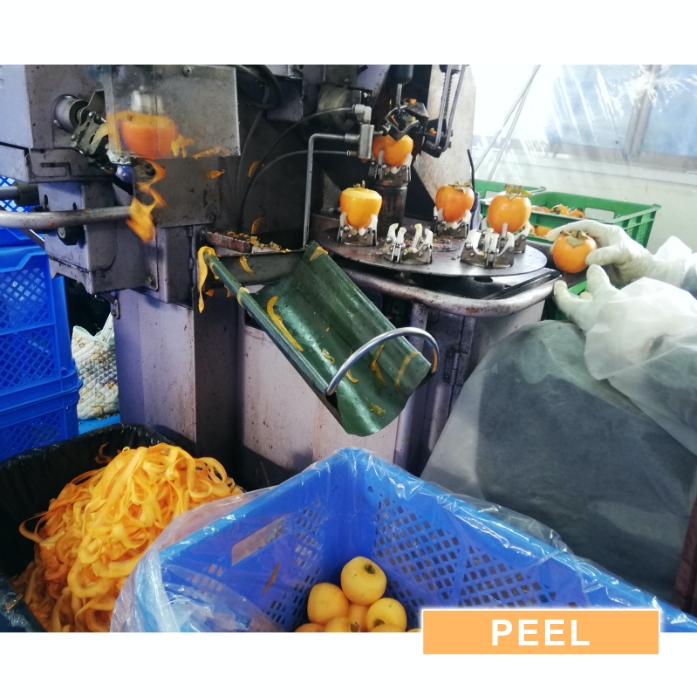 Here's a VIDEO of the peeling process. 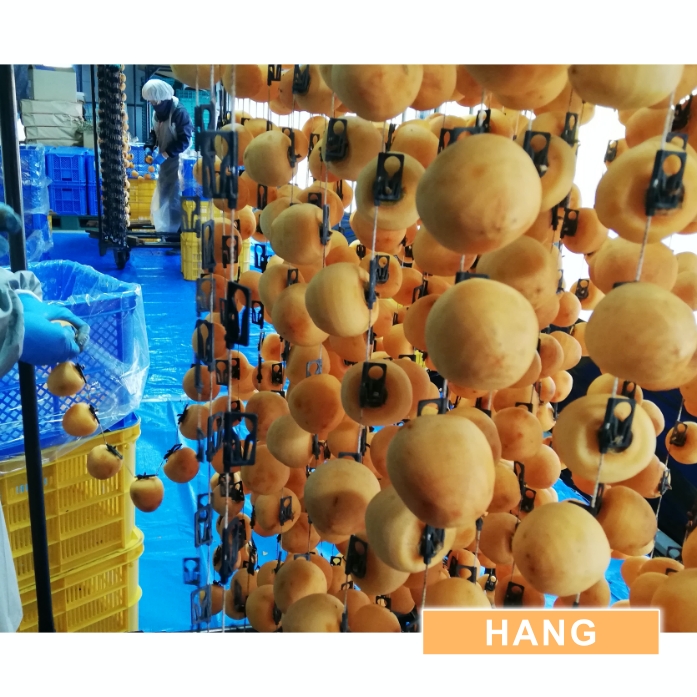 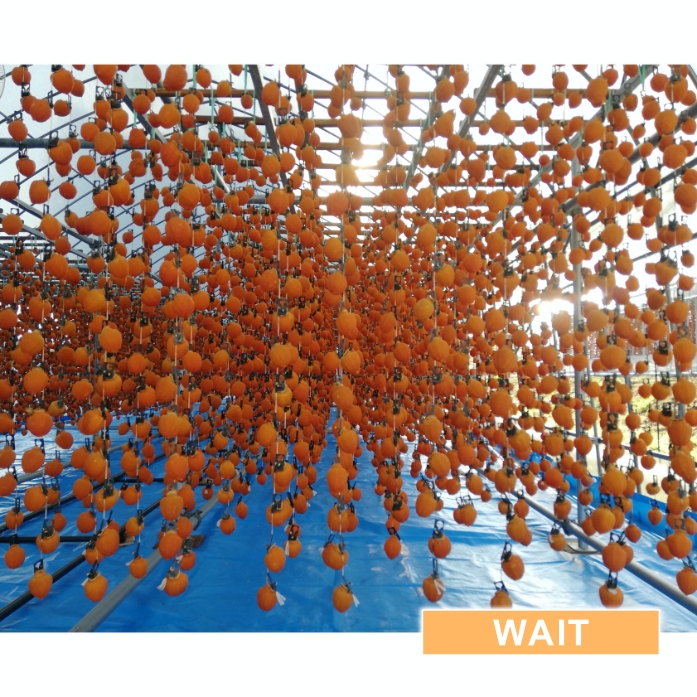 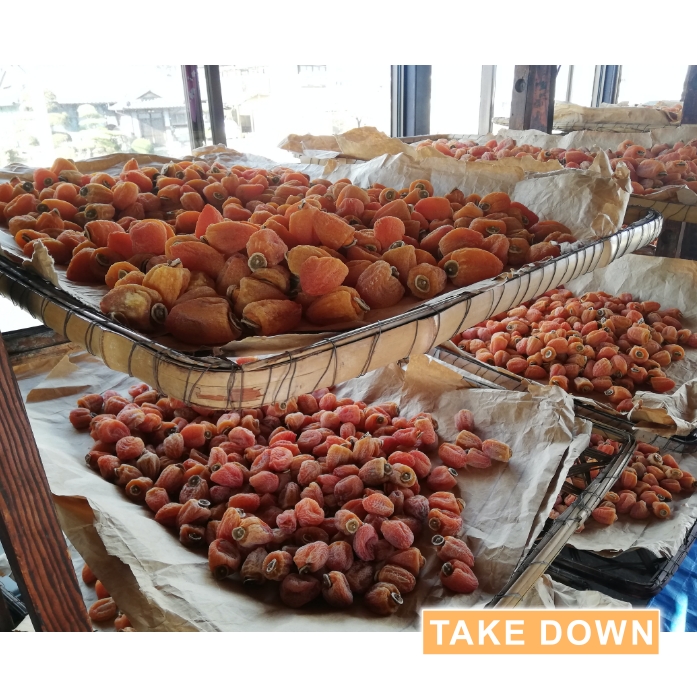 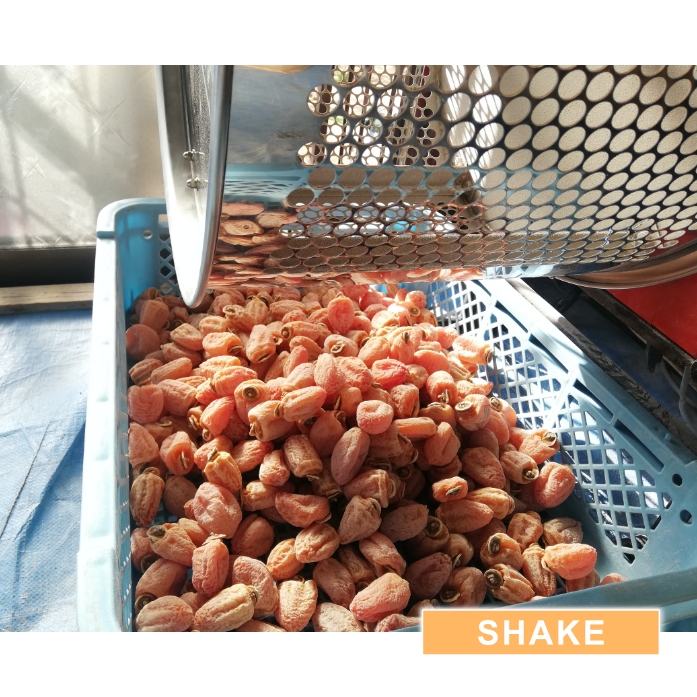 Shaking the persimmons makes the natural glucose contained in the fruit come out and create a natural white outer layer. The whole process is repeated 3 to 4 times, until the farmer is satisfied.

The Ichidagaki are then carefully weighed, selected and packed. 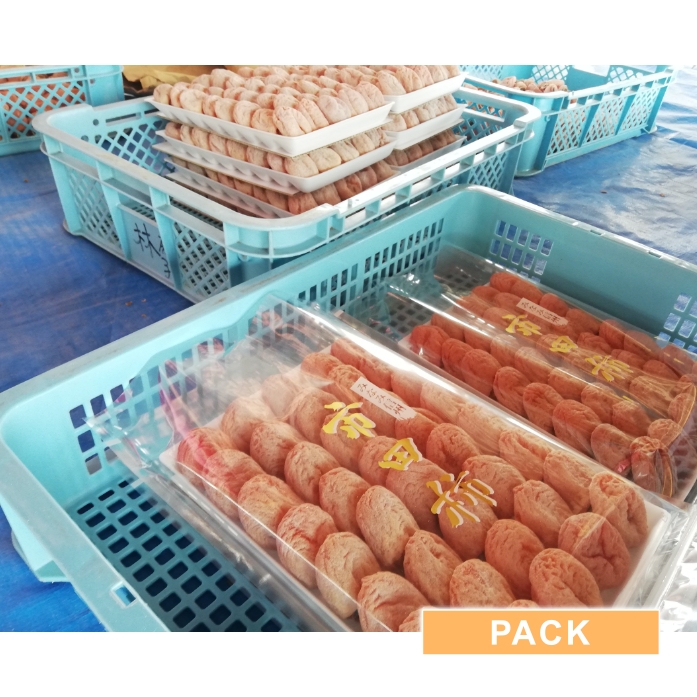 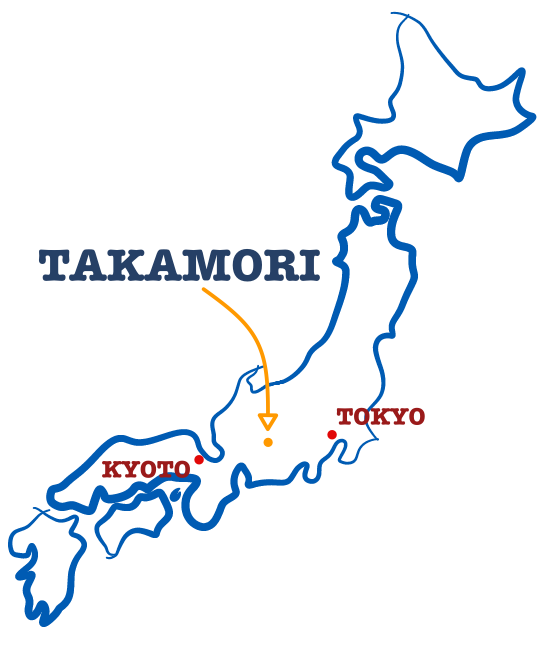